(Madison) – Nearly 80% of bankers rated Wisconsin’s current economy as “good” with nearly the same percentage predicting that the economy will stay the same in 2020 for the Badger State. Low unemployment, strong manufacturing, low interest rates, a diverse economic base, and strong consumer confidence were some of the factors cited as to why the economy was doing so well. Bankers cited the agricultural section of the economy and a lack of available employees when hiring as negative factors creating some economic headwinds for Wisconsin.

Seventy-nine percent of the Wisconsin bank CEOs and Presidents contributing to the latest Wisconsin Bankers Association (WBA) Bank CEO Economic Conditions Survey said the economy was good while another 16% weighed in with “excellent.” Following up on that question, 72% predicted the Wisconsin economy will stay the same with 23% saying it will improve.

“As predicted in our last survey, 2019 was a strong year for Wisconsin’s economy and lending activity. It’s very encouraging to see most bankers believe 2020 will continue that positive trend,” explained Rose Oswald Poels, WBA president and CEO. “Bankers are the best barometers of the economy as they see all segments of every marketplace. They work together with their communities and are the first to see and understand Wisconsin’s economic trends due to their customers’ activities. In turn, our members use that information to help their communities prosper.”

The majority of responses to questions about other economic indicators follow this trend. Loan demand for business, commercial real estate, and residential real estate are good with the 2020 forecast saying those levels will stay the same in the new year. The exception is agricultural loans with 51% saying levels are “fair” and 33% say “poor.” The prediction by 56% of CEOs and presidents was that levels would stay consistent in 2020.

Businesses will hire more employees according to 45% of the respondents, while 54% say businesses will maintain their current staffing levels.

The survey was conducted over the first two weeks of December with 83 respondents.

Please Note: James Bullard, President and CEO, Federal Reserve of St. Louis, will be speaking about the economy at the WBA’s upcoming Wisconsin Economic Forecast Luncheon. Held Jan. 9 in Madison, the media is welcome to attend. To secure a media pass, please contact WBA’s Eric Skrum via email.

Below is a breakdown of the questions and responses. 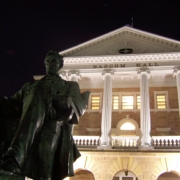 Statement on the closure of North Milwaukee State Bank

Homeowners Paying the Price of New Refi Fee from Freddie/Fannie

Bankers Prove the Power of Community in April

Mergers and Acquisitions: A Compliance Officer’s Perspective Scroll to top