Some call it the Fourth Industrial Revolution, others call it Industry 4.0. Independent of the label, digital disruption and artificial intelligence (AI) have the potential to be a transformative component of the local and global economy in the next decade. The Wisconsin Bankers Association (WBA), the Wisconsin Bankers Foundation (WBF), and a small group of bankers are in the middle of this technological shift, performing research and analysis to create a groundswell of awareness for the potential applications of this new technology.

WBA and WBF are collaborating with two organizations—Curate Solutions and Advancing AI Wisconsin—to determine just how AI will fit within your bank, help your customers, provide value to your shareholders, and give your bank a competitive advantage. WBF, with the help of these partners, hopes to provide valuable insight through research based on real examples of AI and other disruptive technologies.

In September, WBF began working with Curate Solutions and its AI software to provide business intelligence in the areas of commercial/residential development, consumer sentiment, municipal activity, and banking market opportunities. What does Curate do? In the words of co-founder Taralinda Willis, Curate's AI program "finds actionable market intelligence from publicly available data."

Curate's software provides this intelligence by scanning agendas and public minutes from cities, counties, villages, and school board websites to reveal upcoming business opportunities. Using web-scraping and cutting-edge artificial intelligence software Curate and the Foundation identify projects, people, and business issues being discussed across our entire state (or by region). WBF and Curate selected over 50 different keywords for the AI to focus on, including "RFP," "Bond," and "Blight." Using these keywords, the AI program uncovers projects before they go to bid, information important to an association's members, and hot-button issues as they take place. For example, using the term "blight," in the first week the software uncovered a municipality in southeastern Wisconsin discussing a potential new ordinance and fee related to vacant property registration programs.

Does this sound like a far-fetched magical solution? It's not. "AI is not magic, it's math," explained Dale Willis, a computer scientist and co-founder of Curate Solutions. "Curate's software scans through hundreds of thousands of URLs in Wisconsin." Prior to AI, it would have taken a team of people to create rules to accomplish the same task, which would have been very difficult because each municipal website is structured so differently. AI takes common patterns with a volume of data, so it can start making decisions. The keyword "addition" is a good example, according to Willis. "We know that from a construction perspective 'addition' is a key word, but in plain English there are a few uses. Based on real examples, AI 'learns' certain uses of the word are valuable and others are not," he explained.

Curate's AI uses what it learns to pinpoint important information amidst a massive sea of data, Taralinda explained. "What we're doing is more of a numbers game," she said. "Any individual can track one particular municipality or data set, but AI allows a business to focus on a large data set distributed over a region. In that way, we're ahead of the game." The incredible part is, Curate's AI—and AI programs, in general—will only grow faster and more accurate with time as they digest more and more data. "It [AI] is continuing to improve and get faster," said Taralinda. "It's valuable in its current state and it is only getting better."

Earlier this year, Oliver Buechse and Kurt Hahlbeck created Advancing AI Wisconsin, a coalition of business and industry leaders, to increase awareness of the set of technologies often referred to as "Digital Disruption Technologies" and their impact on Wisconsin businesses, workforce needs, educational programming, and the state overall. While several large companies have already launched their own efforts to adopt or develop AI-based solutions, midsized and smaller players have more limited opportunities to get into the game. That's why the WBF is working with industry solutions providers (like Curate and other technology providers) to initiate dialogue with the smaller players and jointly explore how to create access to the benefits of these new technologies.

To that end, the Foundation presents the following "AI Primer for Bankers" based on initial market research and analysis performed by Advancing AI Wisconsin. We hope you'll find it helpful as you begin exploring AI's potential in the financial services arena. 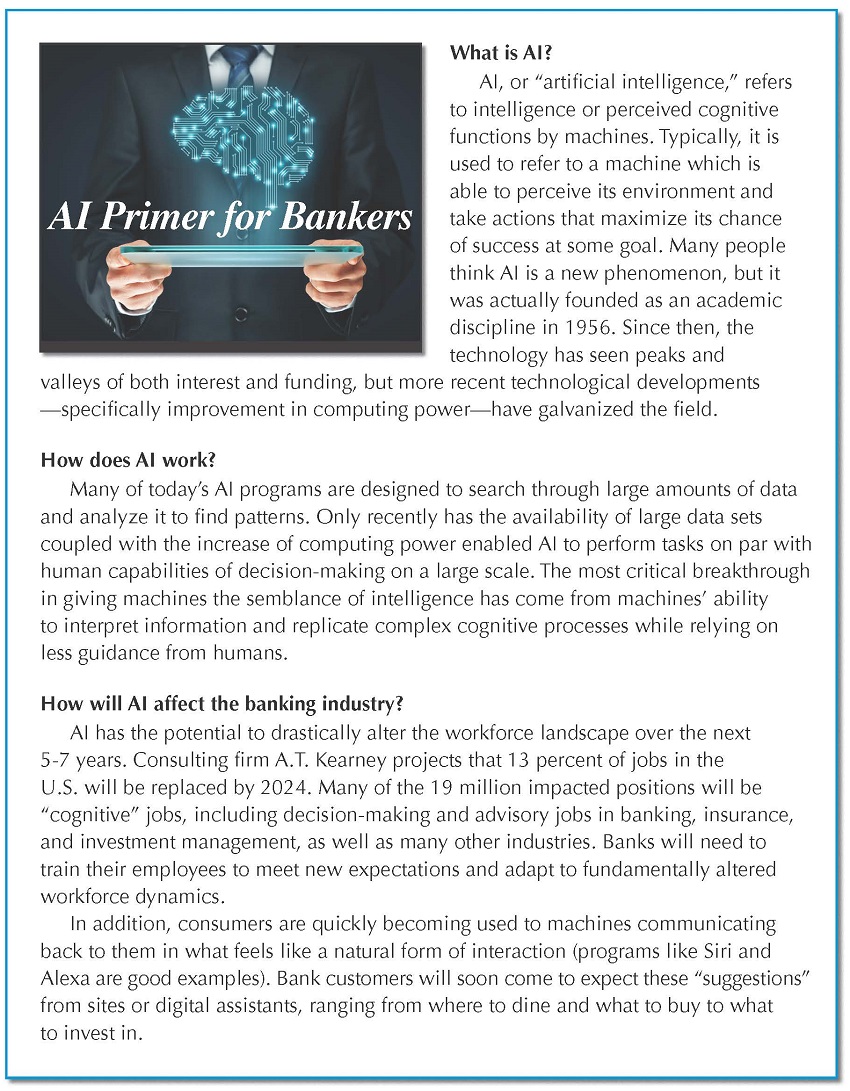 With these changes come not only threats, but also opportunities for increased competitiveness of those who embrace AI and adapt to the new environment faster than others. The goal of AI is not to entirely replace the human aspect, but to empower human decisions with data and insights. Curate's AI program (described earlier in this article) is just one example of how the advent of AI can positively impact Wisconsin's banking industry.

Buechse is the founder of My Strategy Source and an active member of the Advancing AI Wisconsin coalition.
Semmann is WBA executive vice president – chief operations officer and executive director of the Wisconsin Bankers Foundation.