Wisconsin's bankers are the definition of "community advocates" in all that you do every day to improve your local economy through your bank's products and services, as well as through your generous philanthropy of time and money. This column shares and celebrates the diverse backgrounds, experiences, perspectives, and innovation of some of the extraordinary bankers in this state. 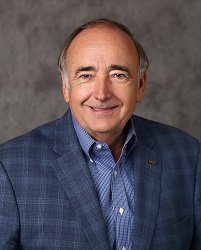 Rose: How did you first get into the banking industry?
Steve: Growing up in a banking household, it seemed to be a good place to start my working career at our then third-generation community bank. I don't recall it being any kind of forced servitude, but I remember walking from seventh grade at St. Mary's School up on the hill in Port down to the bank and literally starting below the ground floor painting white the fieldstone foundation upon which our original 1899 building sat! That wall is still there and I do have fun pointing out to the new hires where my path to the top began. At that time, we had about eight employees at the main office and perhaps three more in our only branch. 50 plus years, 120 employees, and now eight branches later I'm still here… and on some days so is the guy that hired me, Dad Ron who at age 93 still chairs our holding company. I continued to work whenever I could through high school and then college at the business school at Marquette, graduating in 1972 and jumping in full time as an assistant cashier (do they still have those!?). A favorite memory from my college years was asking our then-cashier, a very conservative never married "older" lady that my great-grandfather hired, for an advance on my paycheck to make a car payment. Wow, I only did that once! The rest is history as the saying goes.

What is your favorite aspect of your role at your bank?
I've held more than a few different roles during my long career, and each had its special aspects. Being a teller early on allowed me to build special personal relationships with our many customers, especially the small business owners who would come in Friday nights to bank the week's receipts and get their cash for the weekend. We weren't open on Saturdays then. Fridays also usually brought dozens of workers with their paychecks from our local lawn mower plants to visit with as there was no direct deposit in those days. I came up on the "loan side" of the bank so it was always special to help a couple buy their first home, or finance their very first "new" car and share in their excitement. The first mortgage loan I made was to a high school classmate and I was still here when they made the last payment 25 years later! No two days in banking and dealing with the public are alike, and I'll say that is my favorite aspect of all.

What do you wish the general public understood about the banking industry?
In banking there is "Wall Street" and then there is "Main Street." At least that's how it was for a long time, but now we also have the internet banks. They all deal with money but that's where the similarity ends. Bankers in general, especially during the recent Great Recession, were vilified by our elected officials while we worked through our problems and continued our community support in the meantime. Community banks, not Wall Street or the internet banks, are the backbone of this country and of all the cities, villages, and towns within which they are located. The general public needs to continue to realize that banking locally literally pays dividends to their hometowns in the form of jobs, housing, and quality of life enhancements due to donations of both time and money to countless organizations that provide needed services to young and old alike. I've always said, when is the last time you saw an internet bank name or Wall Street bank on your grandkid's soccer team shirt? We are a relationship business, many times serving multiple generations of the same families all with their own unique needs. If the public wants to make a difference in their hometown, if they do nothing else, they should bank locally and let us leverage their dollars into benefits for them and all their neighbors. I might add that I'm pretty tired of hearing how the banking industry was "bailed out" at taxpayer expense. Yes, many needed a helping hand for a while from Uncle Sam, but our industry paid it all back and the government made a profit to boot. There was no gift involved!

Where do you believe the industry's greatest challenges are in the next three to five years?
Early in my career, our seemingly only competition was the other bank down the street. In our county each community had its own bank, sometimes two: a state and a national charter. As an industry we are great at gathering deposits, using them to grow small businesses into large ones, but then face competition to keep those hard-earned and seasoned relationships from the grasp of an ever-growing group of non-local competitors. It is disheartening to see the influx of private equity funds and even large insurance companies who cherry-pick community bank portfolios with rates and terms that we can't realistically match. Disparate compliance requirements and tax advantages held by the credit unions will also continue to be challenges to a local bank's ability to earn a profit margin such as to reward its stockholders and still comply with ever-increasing capital and reserve requirements. Smaller banks have the ongoing challenge of attracting successor management and quality directors to institutions in more rural markets. Community banks also face pressure to redeem bank stock, having sometimes to incur debt to do so as the younger generation who no longer live in or have ties to the community inherit their parents' and grandparents' holdings. In some instances, a large shareholder's desire to exit forces the sale or merger of the institution. That isn't always bad, but it's a trend that will continue. Out-of-market lenders establishing local loan production offices, internet banks skimming off local deposits with no local reinvestment, along with the ongoing challenge of winning the minds, hearts, and wallets of local residents to see the value of banking locally will continue to be top of mind in the years ahead.

What are some of the most rewarding aspects of your work as a banker?
My current role is that of Executive Chairman and CEO of the bank and President and CEO of our holding company. A good friend of mine who recently assumed similar duties describes himself as the "ambassador" for the business and I like that description. I enjoy the ability to make onsite visits to new business prospects with members of our commercial team and add that personal touch that only a now five-generation family-owned bank can do so well. As for my most rewarding experience, I have to say it was passing on the role of President of the Port Washington State Bank this past January to my son James. He is a seventeen-year banking veteran after his own graduation from Marquette University who has worked tirelessly in many roles first at Wells Fargo and now twelve years with us to achieve this position. His grandfather Ron, my brother and his uncle Mark Schowalter, our recently retired EVP/COO, and especially myself are very proud of James and what he has done in his leadership roles at our sides. He will most certainly lead us to the next level, and we know there is always another to achieve! I might add that my own grandson, a high school student now, is expressing interest in business studies for his college pursuits… Could there be a sixth-generation banker in the works?

Do you know a banker who should be recognized as a Community Advocate for the work that they do? Nominate them today by emailing Rose!