Banks should prepare for the worst, but data leaves room for optimism

However, mortgages in forbearance will also be “priced to mitigate the heightened risk of loss,” according to FHFA’s press release. This additional fee, called a loan-level price adjustment (LLPA), is set at 5% of the unpaid principal balance for first-time homebuyers and 7% of the unpaid principal balance for all other borrowers. Since the loans in question have already closed, the lender, not the borrower, is responsible for paying the additional fee.

And for many banks, that price will be too steep, forcing them to choose between continuing to lend and paying extra costs for forborne loans.

Servicers lost in the shuffle

With the fallout of the COVID-19 pandemic decimating household incomes in a number of sectors—weekly unemployment claims are greater than any time in history by a factor of five—government agencies, lawmakers, and the media (for the most part) have all focused on the impact on consumers. We’ve never needed to measure weekly unemployment claims in millions before, and the front page of the New York Times March 27 edition shows just how stark the historical comparison is. Relief programs should absolutely seek to help struggling individuals.

Accordingly, on April 27 FHFA announced borrowers in forbearance will not need to make a lump sum payment at the end of the forbearance period, which is typically required under the forbearance agreement. Instead, the payments may be added to the end of the mortgage or the borrower may elect an alternative repayment plan. While this announcement only affects GSE-backed mortgages, FHFA Director Mark Calabria encouraged all mortgage lenders to "adopt a similar approach.”

Non-bank businesses have also received attention and support via lending programs like EIDL and PPP. “Essential” businesses including food suppliers and healthcare facilities are recipients of public accolades and community support campaigns. Financial institutions have mostly stayed out of the spotlight, helping their customers and communities from behind the scenes.

Banks entered this crisis in a position of strength, so it’s understandable that COVID-19's impact on them hasn’t been a high priority. But regarding loan deferrals and forbearance, that lack of attention may have catastrophic consequences.

What’s the worst that could happen?

Mortgage bonds’ rapid collapse in value precipitated the global financial meltdown in 2008. Now that various state and federal moratoriums on foreclosures are lifted, the financial system will start to see the impact of several months of payments disappearing.

The CARES Act provides protections for borrowers, but not lenders. Banks and other mortgage servicers still must make payments to investors for mortgages sold to the secondary market, whether or not the borrowers are paying their mortgages. With money going out but not coming in, servicers may need to dip into capital reserves to keep disbursing money to bond investors, and those reserves may not be adequate to sustain the industry long term. Some servicers, especially non-bank entities with fewer lines of business driving revenue, may need to close.

With no one collecting payments on those mortgages and returning money to bond investors, a significant portion of the mortgage infrastructure would collapse, devaluing mortgage bonds... Sound familiar?

The economic fallout from COVID-19 is impossible to predict accurately. The situation is unprecedented. However, regulators and lawmakers learned their lesson from the Great Recession: financial markets are intricately intertwined, so pending trouble in one area will impact everything else.

With that in mind, the Federal Reserve has already taken steps to shore up the mortgage market by purchasing over $200 billion in mortgage-backed securities, and the FHFA announced that servicers are only required to advance four months of missed payments for all GSE-backed loans.

The industry may not need extravagant government support, either. The Mortgage Bankers Association (MBA) reports 4.2 million homeowners are in forbearance plans as of May 17, but week-over-week increases have slowed. 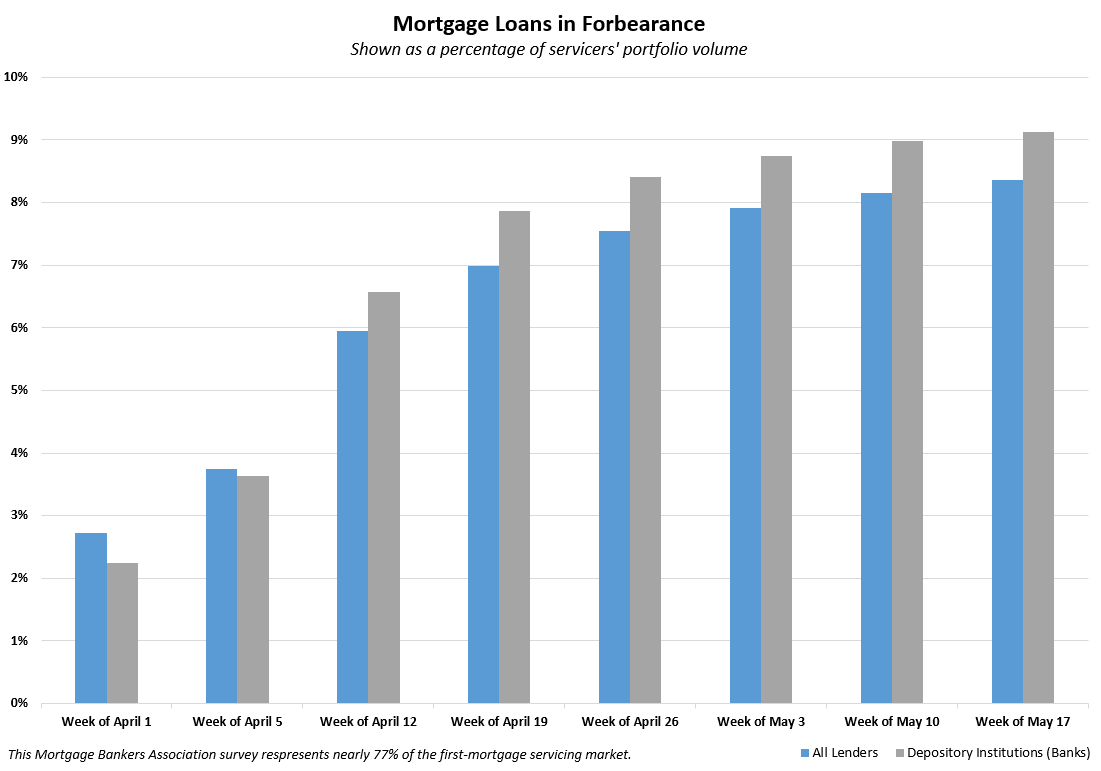 Given that data, COVID-19's impact on homeowners—who tend to be more well-established financially—could be smaller than the current number of loans in forbearance suggests.

Following Murphy’s Law, banks should model and stress-test for the worst-case scenario (dramatic upheaval in MBS bond markets). However, the more likely forecast is for mild-to-moderate distress in single-family mortgages and greater—but not cataclysmic—risk in multi-family/CRE markets.