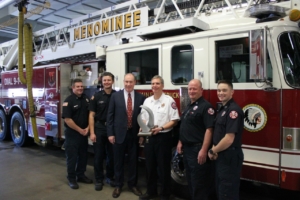 The Menominee Fire Department recently accepted the Community Leadership Award from The Stephenson National Bank & Trust (SNBT). Now in its fourth year, this award highlights one of SNBT’s Core Values: Community Leadership, and is given annually to a person, a business, or a non-profit organization.

“When it came time to decide who should receive this award, there wasn’t even a question in our minds that it should go to the brave people who responded to the fire on the shore of the Menominee River in the Menominee Industrial area,” said Daniel J. Peterson, SNBT president and CEO.

The fire is one that will go down in history for the residents of Menominee. As many folks will retell for years to come, it started on October 6 and was finally subdued on October 21, after 15 long days. The massive blaze brought reinforcements from 73 other regional fire departments, and one from as far away as Dearborn, Mich.

“It’s pretty remarkable how everyone worked so well together, considering resources came from all over the region, fire departments, private businesses, community members, environmental agencies, and corporations,” said Mark Petersen, Menominee Fire Chief. “It was truly an exhausting event, luckily nobody was hurt and there were no deaths. Looking back on it, I’m amazed at the massive effort from people who stepped up, offering food and water, anything we needed. It gave us one less thing to worry about.”

In honor of their tireless work, the Community Leadership Award was presented to the Menominee Fire Department at a small ceremony. It is a miniature replica of the sculpture “Eye of the Storm” created by local artist Rusty Wolfe and erected on the SNBT Marinette Campus. Wolfe and Kim Brooks received the inaugural award from SNBT for their leadership in the public art movement. Past recipients also include: essential healthcare workers of Aurora Medical Center Bay Area and businessman Mike Biehl.

Prevail Bank Will Match Donations, up to $1,000