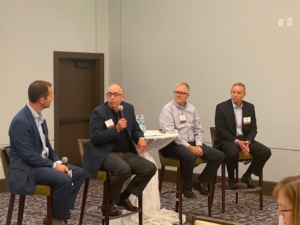 Across the Midwest, many banks held primarily by a single investor or family face unique challenges in their day-to-day operations and future planning. As competition rises, it is critical that there are resources and networks dedicated to closely held bank owners as they navigate internal and external pressures in an effort to determine their own fate.

“It is important that we treat these banks for what they are first — family businesses,” said Peter Wilder, attorney at Godfrey & Kahn, S.C.

It is no secret that operating a family business requires communication. While mutual respect between family members is vital, so too is having acknowledgeable peer network and counsel who are understanding of the unique benefits and challenges owners of closely held banks face. The growth and success of a closely held organization is dependent on one’s ability to navigate family dynamics, bank strategy, and the goals of all shareholders. In having the support of the family, educated advisors, and peers that can sympathize and share their perspective, bank owners will not only have the ability to avoid unnecessary difficulties, but gain valuable knowledge to facilitate the bank’s strategic next steps.

Family-owned banks must make special considerations when dealing with wealth and liquidity, succession, and estate planning. It could be, for example, that selling stock to outside investors to raise capital is not an option or that the next generation is not widely interested in running the family business.

While closely held banks face a variety of obstacles, opportunities for these banks are expansive. For one, family banks have the advantage of relating to their family business clients. Owners of family-run banks may not only serve as trusted financial advisors to local family business, but also as a resource for navigating challenges related to such structural ownership. Additionally, the overlap between bank management and bank ownership allows closely held bank owners to maximize efficiency and minimize conflict simply because there are likely fewer non-active owners to consult for every decision.

“It takes real commitment to plan for the future of a family-owned bank,” states Richard Katz, chairman of Resource Bank located in DeKalb, Illinois. “Family-owned banks are oftentimes the conjunction of a lifetime of personal effort, family legacy, and dedication to one’s community. With careful planning — aided by dedicated professionals — it is possible to envision a bright future for generations to come.”

In order to assist bankers in navigating the unique challenges and possibilities available to closely held institutions, the Wisconsin Bankers Association (WBA), in partnership with the Illinois Bankers Association (IBA) and Godfrey & Kahn, S.C., began offering the Family-owned and Closed Held Strategic Retreat in 2019.

“The Family-owned [and Closely Held Strategic] Retreat is specifically targeted at a group of bankers that do not often have access to similar resources,” highlighted Wilder. “The retreat underscores what succession, tax, and wealth planning may look like for each generation and how this planning gives ownership groups more control over their bank’s destiny.”

This year, bankers in attendance at the Family-owned and Closely Held Strategic Retreat had the opportunity to hear from several panelists ranging from the ever-important topic of wealth to planning for the future.

Thank you to our retreat sponsors!

The event opened on Thursday, October 13 with a peer panel featuring Foy, Katz, and Chad Kane of WoodTrust Bank in Wausau. Attendees enjoyed gaining perspective from the banker panelists on why and how their families dealt with wealth transfers and the succession of the bank as it transfers to a new generation or new owners entirely.

Panelists emphasized that the intimate nature of such retreat has allowed attendees to gain a detailed understanding of how their closely held peers tackle the unique benefits and issues brought forth by closely held ownership.

The following day, Godfrey & Kahn S.C. colleagues Wilder and Jeff Billings presented on estate planning and the corresponding regulatory issues that closely held bank owners need to consider as they look ahead and transition bank ownership into new hands.

Eide Bailly’s Michael Holdren followed with an in-depth discussion on valuations specifically highlighting why closely held banks may consider a valuation; what the typical valuation process looks like; and how inflation, potential recession, reliance on net interest income, and regulatory oversight may impact the future of valuations.

In addition to the thorough discussions and panels held at the retreat, many bankers state that the extensive networking opportunities remain the main attraction in returning each year.

“Not only are the various speakers geared specifically at closely held banks, but the intimate discussions I find myself having each year have been increasingly valuable in recognizing our goals as a family and as an institution,” said Foy.

“This event is not simply networking as you may perceive it from other events,” agreed Katz. “It’s partnership, friendship, deep connections, and the ability to share knowledge.”

Overall, the end goal of the Family-owned and Closely Held Retreat is to ensure shareholder value. From preparing the next generation for new responsibilities to understanding what options there are for those no longer keeping the business, the retreat presents bankers with an intimate setting to connect with their banking peers and other advisors who understand the intricacies of closely held banks.

“This program has been invaluable to the continued success of our bank,” stated Katz. “Its niche target has opened my eyes not only to the strategic opportunities that will benefit both the personal and professional aspects of the bank, but to the experts that are able to help us in implementing the change we wish to see.”