“The best way to predict the future is to create it.” — Peter Drucker

In the midst of an intensely competitive labor market, major U.S. companies including Amazon, Nationwide, and JPMorgan Chase are taking Peter Drucker's advice and predicting the future by creating it. Specifically, they are investing today in the workforce of tomorrow.

With the U.S. experiencing a record-breaking period of economic expansion and low unemployment, many companies face the challenge of growing without an ample supply of qualified job candidates to support that growth. In December 2019, data from the Bureau of Labor Statistics shows employers sought to fill 6.4 million openings from a pool of 5.7 million unemployed Americans who were actively looking for work.

Banks whose strategic plan includes organic growth (rather than purely M&A-based growth) must prepare now for how they will recruit and retain talent to fuel that growth. One effective strategy: plan (and hire or train) the workforce of tomorrow.

For example, in mid-2019, Amazon pledged to dedicate $700 million to improve the skills of 100,000 U.S. employees. In January 2020, Nationwide announced plans to spend $160 million over five years to improve employees' digital literacy. And in February, JPMorgan Chase announced its investment of $75 million in a global initiative to better prepare young people for the jobs of today and tomorrow and advancing smarter policy solutions.

The three aspects of the workforce that will see the greatest amount of change between 2020 and 2030 are demographics, essential skills, and "gig" work. Bank leaders must adapt their talent management strategies today to ensure they have top talent tomorrow.

The U.S. Census Bureau projects that by 2034, the U.S. population will cross the tipping point at which there are more people over age 65 than under age 18. At the same time, while Americans aged 65 and older are living longer, 30-year-olds are nearly 25% more likely to die today than in 2012—the result of dramatic increases in fatalities from drugs, alcohol, and suicide. This has many implications for banks on the customer side (affecting everything from mortgage demand to the viability of municipal bonds as governments struggle to fund pension plans), but also means that banks will need to “do more with less” when it comes to staff. 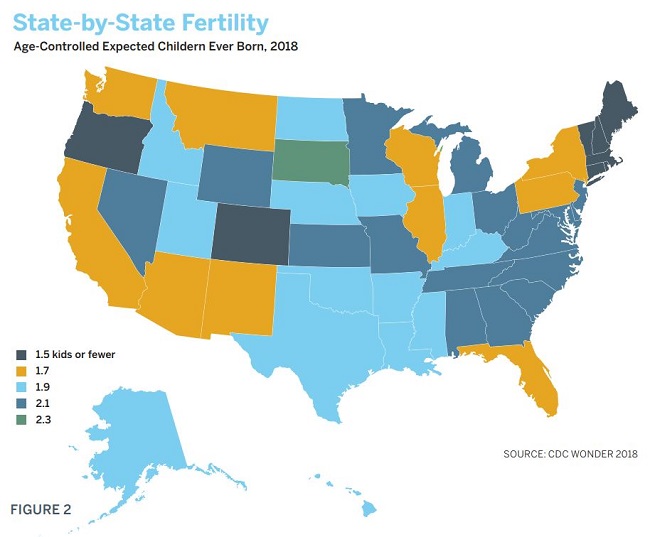 In addition to being smaller, tomorrow’s workforce will look different than it does today. Another milestone the U.S. is projected to cross between 2030 and 2040 is international migration outpacing natural increase as the primary driver of population growth. The Census Bureau projects that by 2045 under 50% of the population will be “white,” making the country a “minority-majority” population. While there will be some local variance, most banks should expect their workforce to resemble the customers and communities they serve—and put programs in place now to help ensure recruiting and retaining that diversity is effective.

According to a 2018 McKinsey report, only 20% of today’s workforce has the skills required for the majority of jobs that will be available in the next 5 to 10 years—and the demand for technological skills will rise by 55% by 2030. Does that mean banks should fire tenured cashiers and bookkeepers in order to hire coders and AI engineers? Of course not. In order for businesses to succeed in 2030, their employees will need a mix of hard and soft skills (analytics, data science, machine learning, but also communication, writing, presenting skills, and emotional intelligence). They’ll also require managers to lead those diverse teams (the same McKinsey study revealed that the demand for leadership and management skills will rise by 24%). 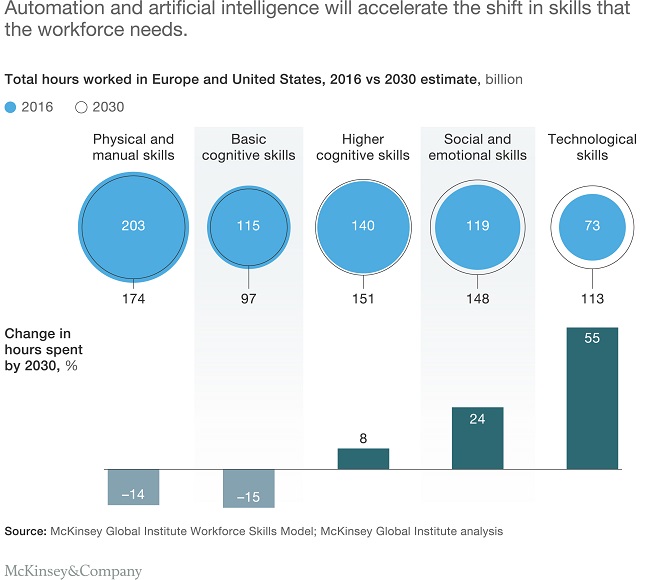 In banking and financial services, technological advances and consumer preferences will drive a reduction in the number of jobs that consist mainly of basic data input and processing (ex: tellers, accountants, credit analysts) but an increase in the number of roles directly tied to customer engagement or technical expertise (ex: CSRs, programmers, financial managers).

When combined with the demographic shifts that will impact the workforce of 2030, this data is a strong signal to bank leaders to increase development budgets substantially. Reskilling current employees may be a more effective strategy than trying to compete in an intense labor market for top talent. Plus, training current employees on new skills (whether those skills are technical, “soft” or both) has the positive side effect of increasing loyalty and reducing turnover.

Who are “gig” workers?

Finally, the workforce of 2030 will rely more heavily on freelance workers and independent contractors in what is sometimes called the “gig” or “sharing” economy. According to the 2019 Upwork and Freelancer’s Union survey, 53% of Gen Z workers (ages 18-22) freelanced in the past year—compared with 29% of Baby Boomer workers (ages 55+), 31% of Gen X workers (ages 39-54), and 40% of Millennial workers (ages 23-38). As the young Gen Z workforce grows, so too will the percentage of the overall workforce who choose to make their income via contract work; today, nearly 60% of freelancers do so by choice, citing flexibility as a primary motivator.

Banks will be among the many companies that benefit from the gig economy structure. Though companies like Uber made the gig economy famous, Upwork’s survey found skilled services are the most common type of freelance work, with 45% of freelancers providing skills such as programming, marketing, IT, and business consulting. That means in 2030, many banks may outsource those functions to contracted gig workers rather than staffing marketing and IT departments in-house. And on the consumer side, banks that develop effective parameters for providing credit to gig workers (who may have highly volatile incomes) could become market leaders in this emerging lending space.

Bank leadership today should consider these three key tactics to employ in their strategy for 2030’s workforce needs:

1: Research demographic projections for your market area and develop or adjust a recruitment and retention strategy to ensure your staff will reflect your customers. This could mean a wide variety of things, from creating or improving your diversity and inclusion (D&I) initiative to investing in local high school or college career fairs.

2: Identify future essential skills and assess your current staff to identify gaps. Build individualized development plans to reskill or train as necessary in order to close any discovered skills gaps.

3: Review your current employee policies with an eye for areas that could provide more flexibility in the future. Develop or update policies related to hiring contract workers.

Knowledge is Power
Stay ahead of the competition with access to the Wisconsin Banking Industry Compensation & Benefits Survey, the largest Wisconsin-specific survey for banks. The survey report contains salary and benefit information for 117 different jobs based on 113 participating financial institutions, representing over 6,600 employees! The compensation survey is open for participation from March 16 – April 17, 2020. Participate today and save nearly 60% on your purchase of the report! Visit www.wisbank.com/WICompensation today.

Thank You for Choosing WBA Employee Benefits Corporation in 2022

LendingClub’s Purchase of Radius Bank: Beginning of a Trend? Scroll to top