Agricultural lending increased in 2019 and is expected to continue to increase in the upcoming year. According to responding agricultural bankers, the volume/portfolio of ag loans grew in the past year for 44% of respondents while another 34% indicated the volume had stayed the same. Additionally, 53% anticipate there will be an increase in ag loans in 2020 with 31% indicating the current levels will continue for the near future.

Loan restructures increased according to 46% of respondents in 2019 compared to 2018. A similar margin, 48%, indicated restructure levels stayed the same during the same timeframe.

Liquidity topped the list of concerns ag bankers had for conditions facing their agricultural borrowers. Ranking as an extremely close second and third, farm-level incomes and uncertainty around tariffs and trade were top of mind as well. Weather, farm labor (cost or availability), total leverage, third-party financing, land rents, and interest rate volatility all ranked much lower in the poll.

When asked about specific agricultural segments, dairy was the highest ranked area of concern for ag bankers by a wide margin. Ranked much lower as an area of concern were grains, beef cattle, swine, vegetables, fruits and nuts, and poultry.

“Bankers value the farms, agribusiness, and hardworking people that make up the communities they serve,” said Rose Oswald Poels, WBA President and CEO. “It’s important for the ag community to have Wisconsin banks to help them through these tough times. Bankers are dedicated to serving their ag customers, even when a loan or other financial product isn’t the best solution.”

“One of our members said it best. ‘In these difficult times, just being there to listen is the most important thing we do. Saying yes is easy, saying no is difficult… and sometimes no is the most honest answer.’”

Below is a breakdown of the survey questions and responses contributed by 50 agricultural bankers from around the state.

Bankers Prove the Power of Community in April 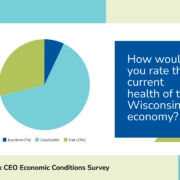 2021 Banker of the Year Announced

Leading Through Change Scroll to top