Tagliapietra grew up in Fond du Lac where she attended St. Mary’s Springs. She then earned her degree in early childhood education from MPTC. She currently resides in Fond du Lac, where she is active in the community as a part of the board of directors for the River Park Homeowners Association and a member of her church. 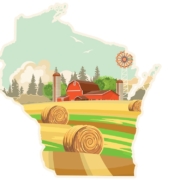 The U.S. Department of Treasury’s CDFI Fund has awarded Cinnaire $10 million through the Capital Magnet Fund, a competitive grant program designed to support the creation and preservation of affordable housing. The CDFI Fund Fiscal Year 2021 awards total $336.4 million to 59 organizations, marking the largest award round since the creation of the Capital Magnet Fund.

“The Capital Magnet Fund plays an essential role providing capital to support affordable housing options for those that need it most,” said Katey Forth, Cinnaire executive vice president – public funding. “Since 2011, Cinnaire has used Capital Magnet Fund grants to leverage private financing to address housing instability in vulnerable communities across our footprint, creating a positive impact for families and local economies.”

Awardees are required to leverage their awards to produce housing and community investments at least ten times the size of the award amount, guaranteeing that from this funding round a minimum of $3.36 billion will be invested to support people and communities across the country. For the FY 2021 round, awardees estimate that nearly $12.8 billion will be invested in total, including more than $9.8 billion in private investment.

The 59 awardees will collectively serve 47 states, the District of Columbia, and Puerto Rico. Thirty awardees plan to invest a portion of their award dollars in Rural Areas, with nine of those awardees planning to invest at least half of their award dollars in Rural Areas. Of the 59 total awardees, 32 are Community Development Financial Institutions (CDFIs) and 27 are non-profit housing organizations. The 59 awardees were selected pursuant to a merit-based competitive review of applications submitted from 146 organizations that requested more than $991.8 million from the FY 2021 Capital Magnet Fund round.

“We are pleased to welcome Erik to our commercial banking team,” stated Tony Laszewski, Waukesha State Bank senior vice president – commercial banking manager. “He brings both a broad financial background and the technical expertise we need to service the businesses of southeastern Wisconsin.”

Doucette holds a bachelors of business administration degree in economics from the University of New Hampshire – Peter T. Paul College of Business and Economics and has 30 years of broad financial experience including business, retail, and mortgage banking in addition to wealth management expertise. In his new role as commercial banking officer, Doucette will be responsible for prospecting, developing, and managing commercial loan portfolios. He and his family currently reside in Whitefish Bay.

I am pleased to share that WBA’s new employee resource group (ERG) for bankers from underrepresented backgrounds in the industry is off to a successful start. About 25 bankers participated in the initial meeting in mid-June, and bankers continue to sign up to join the group. This is a wonderful opportunity for bank leaders to share with employees within their organization as a way to connect with other bankers from around the state. The next monthly meeting will take place virtually on Wednesday, July 27 from 1:00–2:00 p.m.

A few days after the first meeting of the ERG, WBA hosted a webinar led by Alonzo Kelly on the topic of creating a culture where everyone feels they belong. It is very clear that expectations of today’s workplace go far beyond just job duties, and team members do not simply check their personal lives and unique identities at the door when they arrive at work. It is important for staff not only to feel supported by their colleagues, but also to find others whose experiences resonate with their own.

The conversation took off right away at the first meeting of the ERG. It was evident that bankers were eager to find a forum like this to have a safe space to share their concerns and ideas, as well as to receive advice and actionable tools that they can bring back to their organization. We know that many small community banks would not be able to offer this type of employee benefit on their own — and that employees from larger banks also appreciate being able to connect with bankers outside their organization — so this is an area where WBA can play a helpful role.

The WBA Board of Directors formalized a Diversity, Equity, and Inclusion (DEI) plan about two years ago, and this new employee resource group is one of the many ways the plan is being carried out. This group is designed to be an inclusive space for members of the Black, Indigenous, and People of Color (BIPOC); LGBTQ+, persons with disabilities, religious minority communities, and veterans as well as anyone who has an identity that is underrepresented in the banking community. If you have not yet done so (or if you would like to send a reminder of the opportunity), I would highly encourage bank leaders and HR professionals to extend this invitation to the staff in your organization who could benefit from it. Bankers can sign up here for the ERG, and they will receive a calendar invite to the upcoming meeting on July 27.

If you would like to learn more about the DEI resources offered by WBA — including the WBA Connect DEI peer group, the bank DEI sample policy, and more — please visit the DEI page on our website and reach out to any of the contacts listed on that page if you have questions. Thank you for your continued participation in making Wisconsin’s banking industry a welcoming space for everyone who is employed at and does business with our institutions!

One Community Bank is excited to announce the recent promotion of Carrie Schraeder to vice president – retail banking manager.

Schraeder has been in the banking industry for 20 years and has held leadership positions for most of those years.

In her free time, Schraeder enjoys spending time with her family, being outdoors, and volunteering in her community.

It is with sincere gratitude for all he has contributed to our organization that Bank Five Nine announces that Mark W. Mohr has chosen to retire from his role as president and CEO in early 2023.

Mohr has enjoyed a 40+ year career in community banking and has served as president at three different organizations. During his 15 years at Bank Five Nine, their assets grew by $1 billion, they doubled their branch footprint, and expanded the corporate headquarters. He led the bank through a complete rebrand in 2020 and he is particularly proud of their advancements in support of small businesses, non-profit organizations, and low-to-moderate income families.

At Bank Five Nine, their mission is to Make Lives Better, and no one exemplifies these words more than Mohr. Throughout his career, he has served on several corporate, civic, and non-profit boards, often in leadership roles. Additionally, he has made lives better for the bank’s employees, as demonstrated by the 13 consecutive Top Workplace awards and six consecutive Best Banks to Work For awards they have received. For all his efforts, Mohr was named the ICBA National Community Banker of the Year in 2015, and a Top Workplace Leader in 2012, 2014, 2016, and 2019.

Bank Five Nine remains committed to being a strong, local, and independent community bank. As such, the bank’s Board of Directors has retained a nationally-respected executive search firm, Chartwell Partners, to assist them in finding their next president and CEO.

Martin has been with North Shore Bank for over 20 years and has been working with the Latino Chamber of Commerce to foster culturally relevant financial literacy resources for the past 5 years. In addition to this appointment, Martin serves on the board of directors of St. Anthony’s School and has been awarded a number of recognitions for his financial education efforts in the community. Earlier this year, Wisconsin Gov. Tony Evers and the Governor’s Council on Financial Literacy and Capability awarded Martin with the Governor’s Financial Literacy Award.

“I’m honored to be appointed as chairman of the board and am excited to continue my work with the Chamber alongside other fantastic Milwaukee area leaders,” said Alfredo Martin, AVP and community engagement manager. “My dedication to the Chamber and its members continues to strengthen each year, and I’m looking forward to what this year brings for myself and for our community.”

After a successful career in community banking, Tami Eid of First National Bank and Trust Company (formerly State Bank of Arcadia) will retire on June 30, 2022.

In her 43-year banking career, Eid has served in numerous banking and management roles, including compliance, operations, and more. She served as chief credit officer and compliance officer and various positions during her 29 years at Independence State Bank before coming to First National Bank and Trust Company in 2008. During her 13 years, she has served as vice president of operations and cybersecurity and most recently as branch manager.

Eid has been actively involved in community service throughout her career. She has served as a board member, including president of the Wisconsin Bankers Association Peer Group as well as with the St. John’s Finance Council, Whitehall Chamber of Commerce, and over 10 years on the Junior Achievement Whitehall Committee. Eid and her husband Gilbert will be married 38 years this July and have two adult sons, Erik and Alex (Samantha). Eid enjoys reading, music, traveling, watching sports, the beach as well as spending time with family and friends.

Please join us in congratulating Tami Eid on her retirement at an open house on Wednesday, June 29 from 9–11 a.m. in the Whitehall lobby. If you are unable to attend in person, you may also send your best wishes and salutations to 36450 Main Street, PO Box 96, Whitehall, WI 54773.